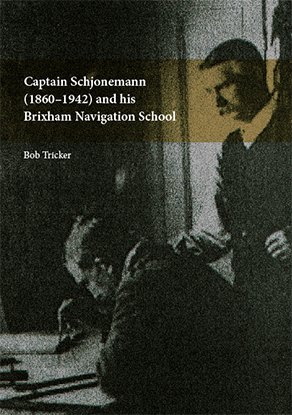 In the early 1900s a retired Danish sea Captain – Lauritz Schjonemann – ran a navigation school in Brixham, Devon, which prepared many men for their mates’ and masters’ tickets.  During his career at sea, Captain Schjonemann served in many sailing vessels, was Master of at least two, and survived a sinking and two ship wrecks.  He is said to have run a hotel on the Florida Keys for a while after being wrecked; but on the death of a daughter out there, he retired to Brixham, where he ran his navigation school.  For simplicity, throughout this paper we will refer to Captain Schjonemann as the Captain.

This paper tells the Captain’s story. It is rooted in tales told by his daughter, Lavinia Howard, who, as a child, sailed with him on some of his voyages. She lived next door to the author, and had a wealth of stories about her experiences at sea.  More material came from a paper: ‘An Adventurous Life Under Sail - highlights from the lives of much loved grandparents, Captain L. P. Schjonemann and his wife Lucy’ – written by the Captain’s youngest granddaughter, Mrs. Ethel Renwick (undated). Information was also received from the Key West Maritime Historical Society, the Key West Shipwreck Museum, Mystic Seaport’s Ship Register database, the Monroe County Library Florida, and the Libraries of other universities in the United States mentioned in the list of research documents at the end of this paper.  Research for the paper was done by Mandy Coles of Origenes Historical Research.

Printed copies of the paper are available from the author.