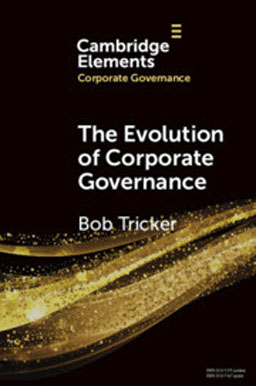 The Evolution of Corporate Governance

In this Element the origins of corporate governance are reviewed, recognising that corporate entities have always been governed, that important developments took place in the seventeenth and eighteenth centuries, and the huge significance of the invention of the joint-stock limited liability company. 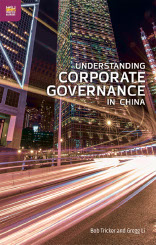 When Gregg Li and I worked together in Hong Kong, around 25 years ago, we did not imagine the tremendous changes that would be made in the following two decades.

The book not only considers what business ethics are, and why they are important, but offers practical approaches on how to develop a successful corporate ethics culture.

Throughout the 20th century, the focus had been on management. But where was the board of directors on the management organization chart? The twenty-first century, however, has seen corporate governance come centre stage, with the spotlights on the way power is exercised over corporate entities around the world.

'Corporate Governance' is based on material that the author has developed over the years for directors’ courses at the Institutes of Directors in London and Sydney, the MBA programme at the Australian Graduate School of Management, executive Masters at Hong Kong University, Melbourne University, Hong Kong Baptist University, and an open-learning course for Hong Kong Open University ...

Bob Tricker was closely involved with the development of management studies at Oxford University. Reflecting on the saga of nearly fifty years of management study in Oxford, he concludes that attempts to study business and management in the University had many of the hallmarks of a circus: businessmen giving acrobatic performances on the tightrope of university politics, academics flying the trapeze of anti-business sentiment, heads of college and business leaders competing to snap the ring-master’s whip, there were even a few clowns.

In this personal perspective, Bob Tricker describes how the study of management developed in the University and how, from time to time, he found himself in the ring.

Other books by Bob Tricker ...

Management and governance entries in The Fontana Dictionary of Modern Thought, edited by Alan Bullock, Oliver Stallybrass and Stephen Trombley (1977, 1988)

Corporate Governance: Practices, Procedures, and Powers in British Companies and their Boards of Directors (1984), R. I. Tricker, Gower, London, and the Corporate Policy Group, Oxford

The essentials of corporate governance from A to Z. A revised, updated and re-formatted version of the original Economist Essential (Pocket) Director (1996, 1998, 1999). Also published in Chinese, Polish, and Russian (prefaced by Mikhail Khadorkovski with a case study on Yukos Oils).

Report of the Inquiry into the Prescription Pricing Authority, (1977) HMSO, London

The Independent Director in the British Company (1979), Korn/Ferry London

Governing the Institute (1983), Institute of Chartered Accountants in England and Wales, London